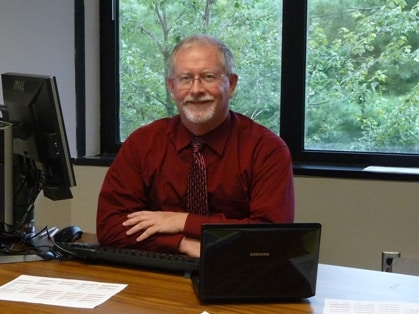 Here’s another in our series on awesome Association Volunteers. This volunteer believes it’s never too late to take that leap. As he says…

There is something in it for everyone at whatever stage of your career as long as you still have an interest in growth and increasing your knowledge.

Not every member of a professional association immediately finds that inner-volunteer. Take Jim DeArmey, Information Services Coordinator for Baltimore County Public Library. Jim is not only BCPL’s go-to guru, he is also an active volunteer with Maryland Library Association (MLA), a state member of the American Library Association (ALA). But as you’ll soon see, it took a while for Jim’s inner-volunteer to really kick in.

Jim joined MLA in 1980, but admits that as a young professional, he didn’t immediately see the importance of volunteering. In fact, it wasn’t until several years later that he agreed to take on his first volunteer position as a member of the awards committee. He says that while it was a positive experience, he still wasn’t convinced. All that changed in 1998 after Jim attended the first Maryland Library Leadership Institute, a week-long leadership development program. He was so inspired and invigorated by the experience that when he heard there was an opening on the committee, he immediately signed up. As he explains, “I was in a spot in my career when I had some perspective on what the Institute had given to me and I wanted to make sure that it continued.”

Once his inner-volunteer was unleashed, there was no stopping him. Jim has since served on the Leadership Institute planning committee as member, chair, and current past chair. During the 2010 Institute session, Jim also acted as a mentor, offering his expertise to a new generation of leaders.

Today, Jim clearly sees the benefits of his involvement with MLA. Early in his career, he was able to connect with other library professionals outside of his own organization, find out what other libraries were doing, and take that knowledge and vitality back to his work place. His work with MLA  also added to his credibility as a professional, a benefit that helped advance his career. As a seasoned professional, Jim finds that he gets a great “boost of vitality”  and infusion of new knowledge from younger members, many of whom were raised digitally. For example, as his job with BCPL began demanding more social media skills, Jim was able to tap into the experience and knowledge base of those younger members. But Jim has much to offer as well, such as what it’s like to work in an established organization, and finds that each generation gains much from this “cross-transference of information.”

This is not unusual with associations, Jim e xplains, because they tend not to develop as hierarchies, but as meritocracies, e.g., places where people with knowledge and value rise up. MLA is a perfect example. While younger members could have viewed Jim as “old, hackneyed, and useless” (how that’s possible, we couldn’t say!), and Jim could have viewed them as “young whippersnappers,” each generation instead saw the value the other brought to the association. Jim relishes this side of his work with MLA and believes much of it is due to the passion his fellow volunteers feel for their cause: “The involvement comes from people who are really interested in it. I really love the work that we do. I wanted to continue, and I wanted to continue with really good people who were well prepared. And so they helped me move on, and I hope that I can help them, at least with the insight, knowledge and encouragement that I can give.”

MLA is Jim’s professional association, but he also takes every opportunity to connect with peers from other  associations, gaining as much from their experiences as from his own. Fortunately for him, his work is also something the BCPL system fully supports, recognizing the value he and other volunteers bring back to the organization. “With all association involvement, people gain exposure to knowledge that they wouldn’t get in their insular job area. It adds vitality to the person who then transfers that vitality back to the organization,” Jim explains. A perfect example is the 2011 MLA conference, which was held in May and co-hosted with Delaware Library Association. Jim found that having people from two different associations with very different experiences added a bit of a “zing” to the conference because they were able to tap into each other’s knowledge and vitality.

When asked whether he had any final thoughts, Jim answered with a resounding “I do!” His experience with the Leadership Institute energized him so that he wanted to help continue its mission, something he has done during his years on the committee. Now as his time on the committee comes to an end, he is surprised to discover an unexpected perk to his volunteerism. Remember, Jim has been heavily involved in the planning and execution of the Institute for several years. Now he is watching the same people he mentored in the last program, as well as graduates from earlier programs, become more involved in the profession and the association, thus continuing to spread that vitality. What a joy this is to see, he says:

If you think what you are doing is important—and I do—it is exciting to think that there are people who will carry that forward.

Yes, Jim’s time with the Leadership Institute committee is coming to end, but that doesn’t mean he’s done with association volunteering. Instead, as many volunteers do, he is looking forward to his next role with MLA. Proof that Jim DeArmey has truly found his inner-volunteer.