Road Trip to Norfolk has some surprises 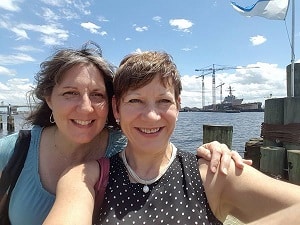 How can a quick road trip to do a quick conference session result in a blog post? When it’s full of adventure (some good, some not so good) and one great AHA moment all rolled together.

Here’s the scoop … Peggy was scheduled to co-present a session on membership at a conference in Norfolk and I went along for the ride (and to keep her awake during the 4+ hour drive). The ride down was smooth although we got to the hotel well after midnight. A quick check-in and off to bed for an early morning rise. Or so we thought.

Major communication fail! We discovered right before calling it a night that Peggy’s session time had been changed, without her knowledge, to a later session. This meant we could sleep in a bit longer in the morning, but also meant we’d be leaving later in the day. This was an issue for us since this road trip was a quick (24 hour quick) there and back again. Peggy’s co-presenter was just as surprised when he arrived the day before. As far as we know, no one sent a change to Peggy or her co-presenter. But we all know that in the association world, it pays to be flexible. We were able to adjust to the new schedule. Lesson here is if you send a change to someone and you don’t get a response … don’t assume the presenter got the message! Call!

Where the real learning takes place: Sure, sessions are great and full of useful information, but the real learning generally takes place outside the breakouts. This is where you make those critical contacts and discoveries. Our AHA moment came at lunch in the form of a simple yet effective promo via the centerpiece, which sparked a burst of creative thinking on how we can incorporate a similar idea into an upcoming client gala. This of course led to more ideas …

Not so great moment: Then again, maybe flying wouldn’t have been so bad. The later session time meant we were leaving Norfolk at rush hour so getting out of the city was slow. But again, we’re flexible so we took the time to talk about some office housekeeping things (worked on putting together a tagging policy on our documents). Our not so great moment came when Peggy’s transmission failed around 10:30pm on 495 coming into DC leaving us standing on the fast lane side of the road waiting for a tow truck.

At least we have a great story to tell!

Side note: We had some time to explore the waterfront. We spent a few minutes at the Armed Forces Memorial. The Memorial consists of a
flag in the center of a plaza with 20 bronze cast letters from fallen soldiers from the Revolutionary War to the Gulf War scattered around the plaza.

If you ever get a chance to get down there, visit the Memorial and read some of the letters.

« The Chapter is “Alright”!
Channeling the Futurist in You (& Your Association) | #ASAE15 »